A Close Land And People

"A Close Land ...", that of a modern jazz dear to the guitarist Julien Vinçonneau for several years. A close country, but open to the outside world - "close", and not "closed" - both aesthetically and humanly: "A Close Land ... & People".

For his first album, released on the brand new label Nantais Aloya Records, Julien Vinçonneau privileges the collective game to ego trip, inviting artists who matter to him: the virtuoso nylon strings Nelson Veras, trumpet player on the skin Geoffroy Tamisier, the singer Leïla Martial, who works his voice as an instrument, the alto saxophonist Gweltaz Hervé.

Four sizes each having their "featuring" along the seven titles composed by the Nantais, with as a guiding thread a quartet playing as incisive as subtle. Around Julien Vinçonneau: Xavier Normand (Doucha, Urban Stories) on bass, Elie Dalibert (Sidony Box, 1 Name 4 a Crew) on alto saxophone and Florian Chaigne (Colunia, Ketu) on drums.

Before being the work of a guitarist, A Close Land & People is a journey into the world of a composer-arranger. A musician as much influenced by jazz - modern and classical - as by rock, who allows himself a replay of one of the most "wild" pieces of Nirvana (Milk It). Here, the guitar looks forward to the metal, standing out of the sound usually stamped Julien Vinçonneau, aerial, rich in effects.

"Less is more," as Miles advocated. This is probably what the guitarist said by not irrigating his record too much soli (three in all and for all) but by privileging an impressionist game and a composition-chameleon art, adapting his writing to the universe of his guests: timeless ballad for Geoffroy Tamisier (Ekko.M), sax duel for Gweltaz Hervé (Bumblebee), learned but striking compositions for Nelson Veras (Nine Drops and the aptly named Tête Chercheuse), epic melody for Leïla Martial (ACLP Pop Song).

"ACLP"? The acronym for A Close Land and People, because the title of the first album of Julien Vinçonneau Quartet is also a nod to a loved one to the musician, having the same initials. No doubt, behind the prestigious "featuring", it is a disc written with the heart that is offered to us.

There are no reviews yet. 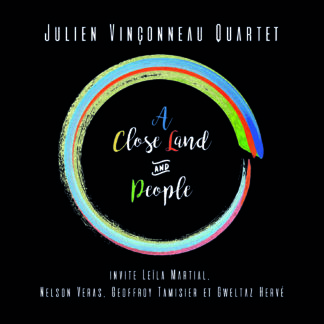